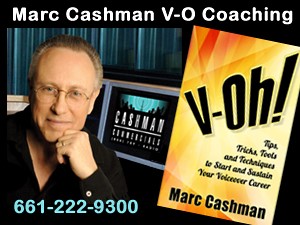 Your animation or videogame demo is your passport to being cast as a character in an animated series or popular videogame. It’s instrumental in:

Want to hear from two superstars of animation and videogames who also produce demos?

Want some honest, constructive information on how to make a killer animation or videogame demo? On Feb. 23rd, multi-award-winning producer, voice talent and V-O coach Marc Cashman, along with his colleague, WME voice actor and recording program trainer, Larry Hudson, will be talking with Debi Derryberry and Dave Fennoy, two of the busiest voice actors on the planet. And they’ll be sharing many of the industry secrets that go into producing outstanding V-O demos that get voice actors agency representation and consistent V-O work.

Sound like a webinar you can use?
Hard to pass up–it’s FREE!

Seating is limited! But if you can’t be there, you can get a recording of it later.