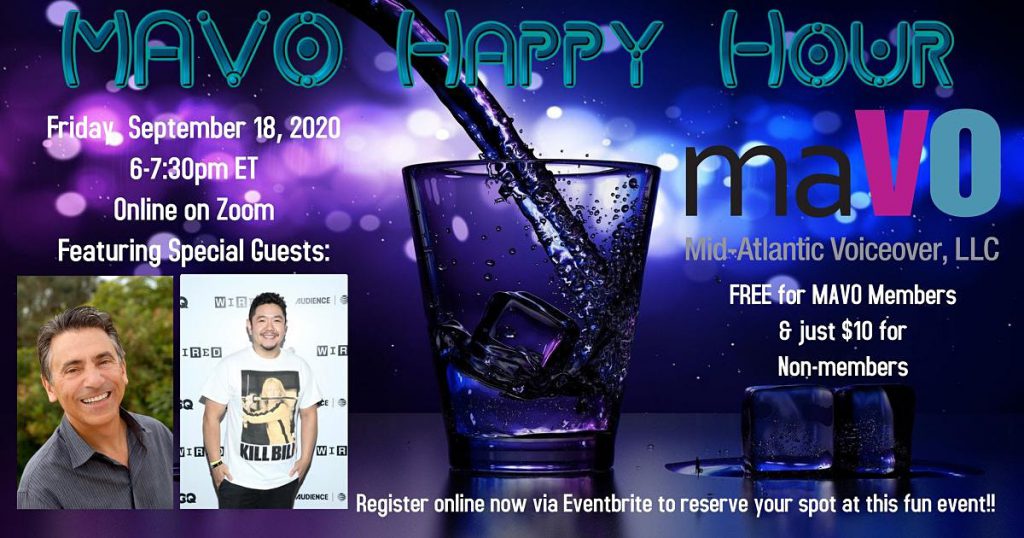 We always have a blast at our MAVO Happy Hours! We are really excited about our September event because our Special guests this month will be Joe Cipriano and Eric Bauza!! Joe was a guest speaker at our MAVO2018 conference and Eric is a featured speaker at Mini MAVO2020 this November, as well as our Keynote speaker for MAVO2021!! You definitely won’t want to miss this one!!

Val Kelly is the Owner, Founder, President/CEO/Executive Producer of

radio/tv commercials, children’s e-learning, etc. Val was introduced to VO in 1999 and has

been actively booking work since 2011. She has trained with excellent coaches such as Sunday Muse, Bob Bergen, Roy Yokelson, Andrea Romano; as well as Noelle Romano, Danielle Quisenberry, Everett Oliver, Sara Jane Sherman, Kari Wahlgren, Tom Dheere, Marc Scott, and David Goldberg from “Edge” studio. Val has studied acting and improv via various studios and in college since 1993 and has a wealth of knowledge about the entertainment industry as well as acting techniques.

Val is the hostess of her “YouTube” show called “Live with Squacky” where she interviews VO industry pros as well as on-screen actors and musicians.

NOTE : Free for Members, $10 for Non-Members