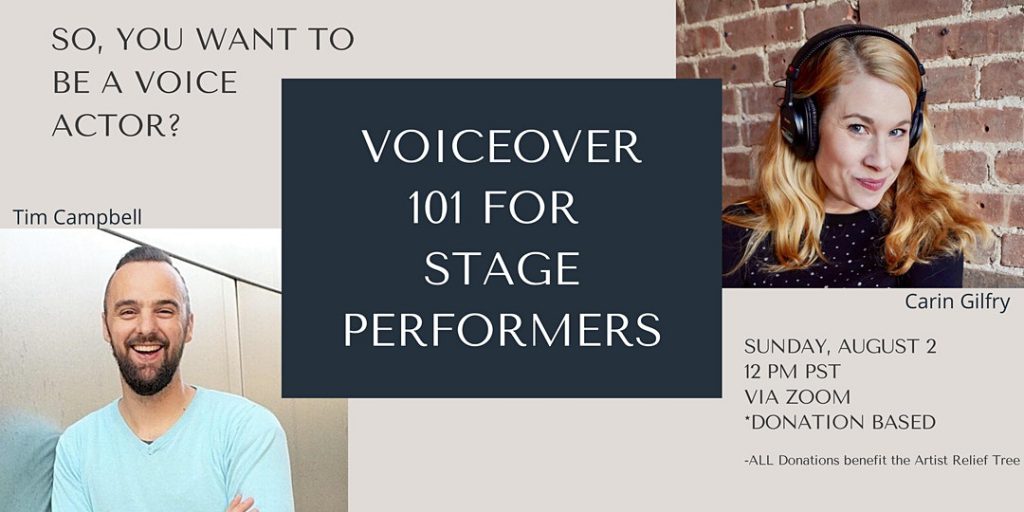 COVID-19 has shut down theaters all over the world, and professional performers are looking for ways to continue to perform and create.

Carin and Tim have been getting a milion messages about how to get started in voiceover since the start of the pandemic, so…

We thought we’d teach a class!

-Learn the voiceover industry basics you need to know.

-The specific challenges for stage performers, and the ways your training will help you!

-Get a real, honest assessment of the voiceover industry today,

This class is completly donation based! Suggested donation is $35, but any amount is welcome. Donations will benefit the Artist Relief Tree.

**A link to watch the class later will be available**

Tim Campbell is an Audie Award winning, Voice Arts Award winning, Independent Audiobook Award winning, and multiple Audiofile Earphones award winning narrator, voice actor, stage actor, and opera singer based in Los Angeles. He has narrated over 450 titles in almost every genre, ranging from classics like Herman Melville’s Moby Dick, to cutting edge bestsellers like Catherine Coulter’s Labyrinth. He specializes in languages, accents and dialects, and is known for his versatile characterizations and flexibility as an actor. In addition to his narration work Tim has done commercial VO campaigns for CocaCola and Fox, and sings regularly with the Los Angeles Opera, the Los Angeles Master Chorale, and on film and television soundtracks such as Star Wars Episode IX: The Rise of Skywalker, Venom, Creed 2 and many others.