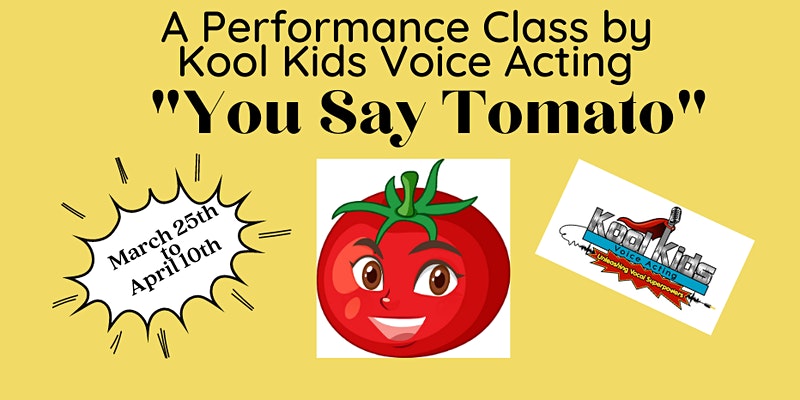 Rehearsal dates are on Thursdays from 6 to 8 PM Eastern time on March 25th, April 1st and 8th, with performances on Saturday, April 10th. In this class, we will cast and rehearse in the first class, rehearse in the 2nd and 3rd class with a performance in the 4th class where the kids can invite friends and family.

“You Say Tomato” by Erika Kreutz is a children’s play about prejudice in the produce world. A giant tomato named Mato becomes insecure after hearing other fruits and vegetables snicker at her for not knowing which group she belongs to. However, after talking to other produce, including a rapping raspberry, a teary-eyed onion, a stand-up comedian orange, a computer wizard apple, and a Potato Fairy dressed with a pink tutu and a cigar, Mato learns that no matter what category she belongs to, she is still the same inside and is free to find a sense of belonging with everyone. It is a play about society, identity, belonging and friendships.

This is also a perfect opportunity for kids with a performance desire to join in a professional performance environment while learning valuable life skills while having a really great time and performing for friends and family.