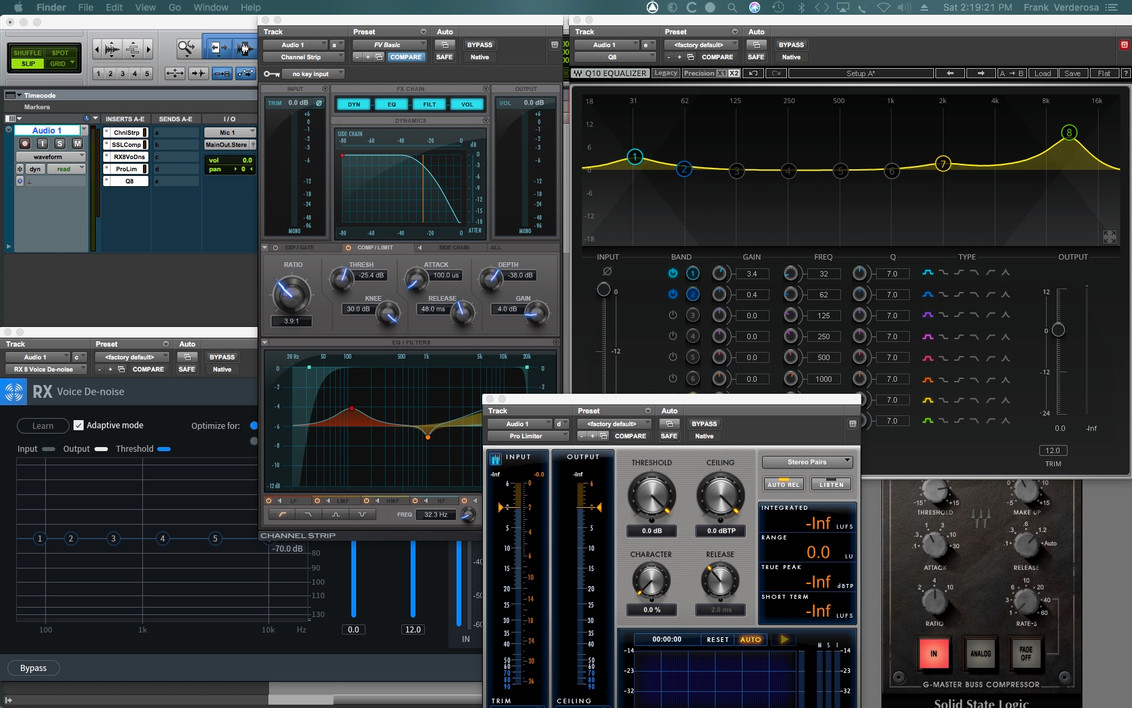 I get asked several times a week if I’ll make a “stack” for someone. Earlier in the pandemic, when I first started consulting regularly with voice actors, this came up a lot- and something about it really bothered me. As time has gone by, and I’ve seen what people have been doing with “stacks”, I realize my instincts were right. For those that don’t know the term, a stack is a chain of plugins to process your voice. As a mixer, I’ll use varying degrees compression, EQ, noise removal, etc. to get your voice where I need it to be for the job I’m working on. So what’s the exact right setting for your voice?

If I were to take five different audio engineers, give them a recording of your voice and ask them to process it, you’d get back five different opinions on what sounds best. But that’s just the tip of the iceberg for my issue with doing stacks for people. How I handle your voice is going to be dramatically different based on the spot I’m mixing… the music behind you, the sound effects, the tone of the commercial, etc. By definition, it’s never going to be a one size fits all situation. This is why every single commercial mixer or studio you work with- either via Source Connect or by sending files- will ask for the same thing: send your voice flat with no EQ or compression. Part of the reason for this is consistency. Engineers in the post-production world don’t generally process audio going into their DAW. By leaving the EQ off and the compression mild or off completely, matching that voice down the road becomes seamless. If you start applying processing and need to match things for pickups later- the slightest change to those settings will open up a can of worms. Studios almost always record flat, and will almost always ask you to do the same.

But that’s STILL not the reason I don’t do stacks!

“But Frank, all I do is pay-to-play website sessions where they want me to deliver finished audio”. Sure. I get it. And you want to sound your best. But if I make you a processing chain, and you have no real understanding of what I did or how to control it, all I’ve done is set you up for inevitable failure. What I mean by that is that it’s very easy to inadvertently alter a setting by a simple roll of the mouse or trackpad over a processor, and you might never hear or realize what you’ve done. The end result could be sending off auditions or job recordings that are blown out with distortion, overly bright, or completely dull. It’s a big can of worms. I’ve seen it first hand with people in their auditions and during consults.

But that’s STILL not the reason I don’t do stacks!

You can’t EQ and compress your way out of a bad setup.

I recently consulted with someone who needed a simple evaluation. I always ask for dry, unprocessed audio to really hear the microphone and how the booth sounds. This person sent me over their raw audio, but also added two different versions with stacks they paid hundreds of dollars for from two different people “so you can hear what my sound really sounds like when I send it out”. What I’m about to say isn’t meant to take away from the well intentioned efforts of other audio engineers working with voice actors from home- but I was truly disappointed in what I was hearing. I don’t say that because of what they did. I say that because neither person hired to make that stack weighed in on the bigger issue of the persons booth and mic placement not sounding good. In simple terms: you can’t EQ and compress your way out of a bad sounding setup. You can’t make your booth better by processing your way out of it. The only way to fix it is to do the work. In this particular case, once the actor sorted out their mic position and booth, the stacks paled in comparison to their natural recorded sound.

Another person that booked me for a booth consult recently kept sending files that sounded roomy and boxy from a booth that I know should have been sounding better. I was so frustrated. I finally said “are you SURE you don’t have processing on your voice? To me it sounds like there is compression and it’s exacerbating the reflections in your booth”. They were certain there was nothing- and even showed me their recorded track. Nothing on it. I continued to press, because this wasn’t adding up- until finally: “Oh, well on the master output I have a stack that I copied from my coach’s settings”. Bingo. Compression. Limiting. More compression. Ugh. “Bypass all of that!!”. And that was all it took to improve the sound of the booth dramatically.

Voice actor/ engineer and all around insightful guy Byron Wagner put it this way (for my musician friends): “The downside to using stacks for VO is that they serve the same purpose as the tuning heads on a fine guitar, you can’t just set them at the factory and weld them shut forever.” I don’t offer stacks because if you’ve done the work on your booth, invested in a good microphone, and have worked out mic technique- you likely don’t need a ‘stack’. If you’re doing commercial work and just standing and delivering reads via Source Connect or other methods, your engineer doesn’t want you to be processed either. I’ve been a sound engineer for 31 years after 4 years of college and ear training to inform my decisions on processing. In almost every single case where an actor has experimented with plugins, they have ruined their otherwise excellent sound. I’ll share more about that in a different post.

The downside to using stacks for VO is that they serve the same purpose as the tuning heads on a fine guitar, you can’t just set them at the factory and weld them shut forever. -Byron Wagner

I will be teaching classes soon on EQ, Compression and Limiting for those who want a better understanding of it all for those that are struggling to process sound for audiobooks to meet ACX specs, or mixing their own projects and want to get grip on what they’ve got. Stay tuned on my website for this and more. But for now- work to improve your space and mic, and stop stacking.