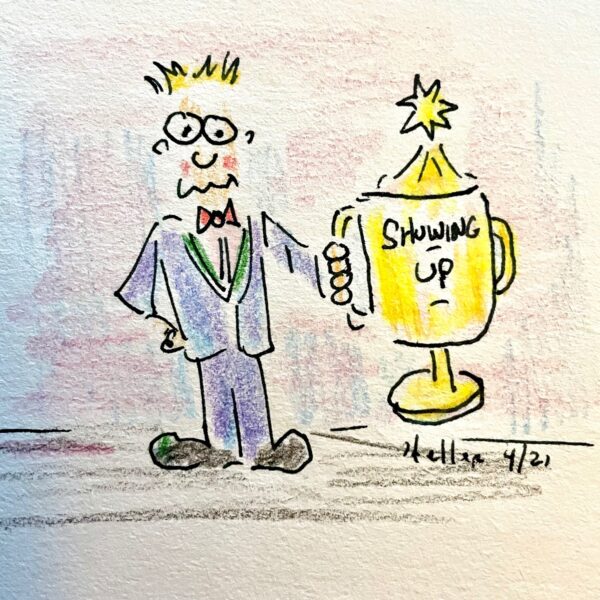 From: For the Hell of It

The Principal came into each classroom and handed out certificates to every kid who showed up every day. There were tons of us. Back then, you had to be actively gushing blood from an open wound to get out of school. We all got prizes too.

We all got to go to Comiskey Park to watch the White Sox get beat by Cleveland or Detroit or the Mormon Tabernacle Choir—whoever was in town that day. It was an old stadium, and some seats were blocked by giant columns. There was a seat there – but it was called “partial view” so if someone made a great play right in front of you, you missed it. Again, it was the White Sox, and a great play was pretty unlikely and that’s where I got to sit. And it was great. Because I won the right to be there.

It was an award. An award for an accomplishment. It was unlooked for and I had no idea that such an award existed. I didn’t try for it. I didn’t hope for it. I just got it.

Many kids today get awards just because they show up. That was what this was. Sometimes, kids today get awards for sports where no one keeps score because -apparently, no kids should ever lose or win. They should just participate. Sadly, life is nothing like that and the lessons you get from losing or winning don’t sink into kids until they are adults, and they have no idea why no one is giving them points for just showing up.

The point is that awards are nice, but they don’t always mean what you think they mean. The entertainment industry is in the midst of the award season and no one can remember who won an Emmy or a Grammy or the Nobel for Silliest Singer Name.

I want to be clear- dressing up and going out to have a wonderful evening to celebrate your colleagues being nominated for an audiobook award is wonderful! Even if it’s virtual. It’s still nice to have an excuse to suit up and mingle. We work in isolation so it’s nice to be recognized. It’s even nicer if you are the one nominated.
But let me say this: Being nominated for an award or wining an award does not make you better than anyone else. It doesn’t mean that everyone else who recorded books in the category you were nominated in wasn’t as good. It doesn’t. It can’t.
Art is subjective. There are people who enjoy the work of Mickey Rourke or Kanye West or who think the Kardashians are awesome. Go figure. (They are wrong – by the way).

I remember my first Audies Awards. It was a gas!. I had no idea what an Audie was and, as I recall, everyone was taking full advantage of the bar. It was at Tavern on the Green and we had steaks and wine, and no one listened to anyone speaking and I won my first Audie. I didn’t even know there were other publishers besides Recorded Books! It was an eye-opening experience and much wilder than the Audies of today.

Now there are the SOVAS, the Audies, The Independent Audiobook Awards, the Grammys (Spoken Word), the Odyssey… lots of em. I have won all of them except the IAA and the Grammy (I blame Meryl Streep for that! But because of her and Kelly Gildea, I am forever a Grammy Nominee!) and I am exactly the same actor I have always been – hopefully better than I was yesterday – but you get the gist.  The point is publishers aren’t  hiring me because I won an Audie or 3. It doesn’t work like that. Nor should it. I get work because my clients have confidence in my acting skills and know I can tell the story.

There are few things more wonderful than to win an acting award from your peers. I know that many of us were perturbed that the Audies were a bit celebrity happy this year. Actors who rarely spend time in a narrator booth getting the nominations, but that’s because the APA wants the industry to grow and getting big names to attend soirees is a fine way to do that. It doesn’t mean that your work is not valid or good or worthy of praise. It doesn’t.

Look at how many categories the SOVAS Awards has. It’s a different system than the Audies. Like the Independent Audie Awards, actors can submit themselves for awards — they have awards for every conceivable voice category because they want to recognize excellence and because the more categories one has, the more actors can be recognized.

It doesn’t matter whether it’s publishers who submit you or if you submit yourself, the awards ceremonies promote the industry and you. And if you don’t get nominated, or don’t win, it still doesn’t mean you aren’t wonderful. If not for you, there would be no awards at all. None.

The organizations that present awards do so to generate interest in the industry. They motivate listeners and performers, and we get to wear really nice clothes. I have zero complaints about the various ceremonies and events. I may even start handing out the soon to be coveted “Johnny” for outstanding work in pauses.

I love my Audie Awards. I love my Audie Medals. I am moved beyond words that I was named a Golden Voice – but I must always be on the lookout for the next job. No one yet has given me a gig because I won an award. They give me work because they like the work I have done and continue to do. Awards are great. They are awesome. But we are free lancers – moving from one gig to the next and we need to never lose sight of that. Looking for awards and recognition is not as productive a step in your career as is looking to be better actors, more engaged storytellers.

Get better with each job. Be more aware of what works and especially aware of what doesn’t. Don’t go for the award. Go for telling the story perfectly- to the best of your ability. And recognize that your best is ever-changing, ever-growing, ever-better.