Guest Blog: Kim Handysides – AI in eLearning and Voice Over 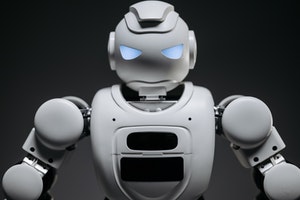 Guest Blog: Kim Handysides – AI in eLearning and Voice Over

My Chat with an eLearning Industry Superstar: AI in eLearning and Voice Over

Like politics and religion, AI seems scary and divisive to many. However, the more we know about it, the better equipped we’ll be to navigate the future waters it will overwhelmingly inhabit. The creators of AI software are experimenting with it everywhere. It has been deployed in coding, writing, art…pretty much any sector you can think of is starting to see AI, at a minimum, as an augmentation to its industry.

Recently a deep fake of Tom Cruise went viral. Startlingly realistic, it was seen as a harbinger of doom for actors everywhere. Except it wasn’t because the video still needed an actor body double (they used a Tom Cruise impersonator) and each few seconds long Tom Cruise clip took weeks to make.

The creator of the Tom Cruise deep fake has been reported to say “I just strongly think that there should be laws to help with the responsible use of AI and deep fakes.” In the same vein, the voice over community watches the lawsuit of Bev Standing. The (now former) voice of TikTok, and subsequently a whole host of advertisements that she neither agreed to nor was compensated for.

AI Voice Over Isn’t There… Yet

“AI voices sound more realistic than ever!” That’s the frequently touted line, and they do, but they still don’t sound human. Some companies tout low prices, “$16 for converting roughly 142K words,” but the quality isn’t dissimilar to getting your laptop speech to text to read your script for free. High-quality, realistic AI voice over costs a fortune. It takes a long time to render and build, and even longer to get a semblance of emotion through cadence and pitch. And even then, it’s shaky or limited in use.

In my recent conversation with eLearning thought leader and Instructional Designer Connie Malamed stated, “AI voices have gotten better over the years, but they don’t have the warmth and the intonation that a human has.” In her online community Mastering Instructional Design, she encourages instructional designers to not only hire humans but always to hire professional voiceover artists. Nothing replaces the emotional connection of one human learning from another human. But she does see some areas where a company or even a voice over artist may be able to reap some benefit from AI voices, for example:

Does the Public Want AI Voice Over?

Admittedly high-quality AI voice over is getting more advanced, and more indistinguishable from reality. Particularly when the AI voice in question has a lot of original recorded material to work with and a lot of money to perfect the results. It says something about the amateur levels displayed by current AI models that they are most used as a placeholder, a one-liner, a robot, or sometimes as a joke. But just because you can do something, doesn’t mean you should. Hollywood sound engineer buddies tell me they’ve had the capability to do ADR without actors for years but won’t or don’t because of Sag/AFTRA rules and other legalities.

Companies also need to consider the reaction they may receive if they try to feed the public ‘a lie.’ Such is the example of a documentary of Anthony Bourdain which received major backlash after it was discovered that a handful of lines in the ‘documentary’ were created using an AI version of Anthony Bourdain’s voice. Understandably, the public did not take the revelation well. The production spent money and time, reportedly working with four different companies to get the AI voice to the correct level of realism only to be critically panned.

“When I wrote my review, I was not aware that the filmmakers had used an AI to deep fake Bourdain’s voice for portions of the narration.” Critic Sean Burn wrote, updating his previous review, “I feel like this tells you all you need to know about the ethics of the people behind this project.”

In fact, 73% of people don’t trust AI voice technology to make calls and 81% of people want to be informed when they aren’t talking to a human. When Google Duplex was released (with stuttering “ums” built-in) people were furious that Google didn’t declare the AI, feeling tricked and manipulated. And I must admit its voice technology is some of the best I’ve heard, it sounds hyper-realistic.

AI Voice Over in Games

There is an argument to be made that the voice over industry will expand because of AI voice over. Where a computer game might have once stuck to speech bubbles, silence, or only a few words of dialogue, the expectation among modern users is a fully realized world.

Other industries have experienced similar expansions. When CGI became more mainstream and realistic, more movies and series were greenlit. Suddenly television shows had access to better production methods, better CGI, and better camera equipment. Notably, the cost for these television shows hasn’t gone down, instead, it’s gone up. Just ten minutes of CGI in a Game of Thrones episode reportedly cost $800,000, with a single frame taking 12 hours to render.

Games like Obsidian use AI voices for development and replace the audio with real actors for the final product. Some have touted this as the game getting onboard with AI, but I would argue it’s a strong example of them getting on board with professional voice over. They use AI to prototype their stories, not to replace their voice actors.

AI voice over seems to be primarily for development, for very low budget projects, or very high budget projects where a lot of money is spent to replace a line or two. A fan created Witcher 3 quest mod used an AI voice generated from Doug Cockle’s character Geralt of Rivia. The AI voice was released in the final product.

Watching the trailer, I was surprised by how good the AI voice was, only to discover that the voice in the trailer is actually Dough Cockle’s voice, lifted from another scene. As a Reddit user put it, “This is far from good enough for actual games. Many words are mispronounced and names, in particular, are a mess. There is also an obvious lack of emotion.” Another user suggests AI voices will likely be used in a similar fashion to Autotune, filling in the gaps when voice over artists aren’t available.

So, What’s a Voice Over Artist To Do? Be Human

I recently narrated a gig where the company initially used an AI voice, completed all the voice work, and hated it, so they booked a human (moi) to replace the AI. One of the reasons why the AI voice over for Geralt was considered more acceptable (by the players) than it might have been for other characters is because Geralt’s character already had a dry, emotionless voice style. This leads me neatly to one of the best ways for voice over artists to beat AI: be more human.

A modern-day narrator should be as far away from an AI as possible. Never think of the narrator as an anonymous entity shipping off words into outer space. Whether it’s an eLearning module, a game, a commercial or an animation the listener should feel and be captivated and motivated by that intangible human connection. It’s not a coincidence that as AI and text to speech becomes more common and accessible, so does the increased demand for the authentic voice over artist, real, conversational, genuine. The announcer is out, human connection is in.

In the next article, I’ll discuss some of the best methods of keeping your place in the voice over industry. How to take advantage of expanding roles and creative directions for voice over. If you need a laugh after some of this AI talk, check out this commercial for a lawyer written by an AI.

Connie Malamed Bio: Connie Malamed helps people learn and build instructional design skills at Mastering Instructional Design. She is a consultant, author, and speaker in the fields of online learning and visual communication. Connie is the author of Visual Design Solutions and Visual Language for Designers. She also publishes The eLearning Coach website and podcast.